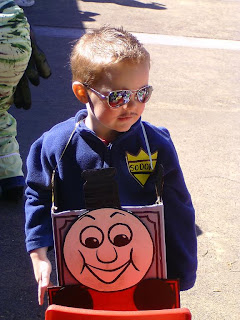 On Friday my son, Dartanion (yes, of The Three Musketeers) had his Pre-school Book Parade.

Dartanion is an absolute Thomas the Tank Engine fanatic so I spent the better part of a day (or 2) painting and gluing to make a costume for him.. with his strict and unrelenting criticism!

We met his other little costumed friends at the parade and we had a wonderful time!

I will not put pictures of the other children (without parental permission) but I will tell you that the kids all looked fantastic!

I would have to say that the best costumes were those that reflected the modern, Burton version of The Mad Hatter, from Alice in Wonderland. Some parents put in an immense amount of effort, and skill!

I thought Darty's make-up (an almost Village People like moustache) was good, but the make-up skills of some parents was enough to make your jaw drop.

I would have to say my favourite part of the day was getting to see Darty interact with his friends. I usually drop him at pre-school and leave, but it was good to stay around and see how different he is with his friends, and how confident.

The whole experience reminded me of my school book parade when I was just a child of seven or eight...

I went as Rapunzel. My Mother took a long time making this beautiful hat for me. The hat was a tall tower of mini foam bricks and glittery cardboard and at the top was a small cuttout window with a Rapunzel doll, with long hair which I used to tie the hat on under my chin.

I remember feeling invincible in my Rapunzel hat!

Have you been to a book parade?
Posted by Nicole, The Book Lover at 6:39 PM