Lurking in the Shadows 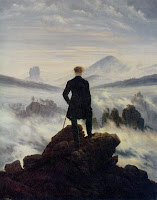 Plot; Victor Frankenstein is a young man from an aristocratic family. He has a keen interest in science and, after his studies, he realises that nothing is more important to him than the acclaim and appreciation he would receive for creating some new scientific masterpiece.

Frankenstein begins his work building the body of the human and believes his dreams of success will have been reached when he can bring this "human" into existence, but the creature he creates is not what he has bargained for and Frankenstein finds himself in a hell of his own making.

My Thoughts; For the first book review I have written in weeks, I was hoping that Frankenstein would be a wonderful start. Sadly, only one word comes to mind with this book; disappointing.

As I started this book I was so excited, knowing that this book is one of those select few which acted as an avante gard work, leading to such modern works of paranormal fiction as the Twilight saga. I was also excited knowing that Frankenstein is considered one of the most frightening of tales.

As I began to read and the fear factor was just not there I reasoned that down to being my own modern level of fear because, as we all know, us modern folk can handle alot more creepy bits than those of times gone by. What I didn't expect was the monotony of the read.

What frustrated me the most about this book was the detail of description that Shelley has gone into when describing such things as the surrounding landscapes (and believe me, this book travels through alot of very similar and mundane landscapes) and yet she doesn't give us much of a description of the key elements, such as the "beast". I understand the concept behind this, to keep the reader from experiencing the vulgarity of knowing how such a creature looks, but I would have rathered a description of the creature than to read page after page of trickling waters, rolling clouds and rocky hills.

There were alot of times when I skipped through large chunks of text and this mainly comes down to the repetition of landscape. The first few times Shelley talks of the glorious mountains it is beautiful, but after a while one mountain just starts to sound like the next.

Another aspect of this tale which I found frustrating was the detail in which Shelley goes into when talking about the peasant family and their history. As I read the history of the family I was expecting from then on that it would play some important role in the continuation of the story. By the end of the book I realised that it was, in my opinon, a totally irrelevant waste and I felt cheated.

What I did gain from this book, however, is a lesson on judgement. From the start the "beast" is feared purely because of his appearance even though he is not only well spoken but keen to be educated. It is a classic case of don't judge a book by its cover, and what better payback for that judgement that murder and mayhem!

What I must commend Shelley on is the fact that she wrote this book when she was only nineteen. Looking back, I am fairly sure that at nineteen I was more focused on writing messages to friends to even consider accomplishing something as wonderful as writing a book.

I think I am now going to have to visit the local DVD store and pick up a copy of a few Frankenstein movies to see what the fuss is about. After having read the book, and knowing how popular the Frankenstein flicks have been, I can only guess that their is a marked change between page and screen.

To anyone who has their heart set on reading this book, don't let my review put you off. Go for it. But for those expecting a scarey, nail biting thriller, there are other less monotonous reads out there which will give you the scare and a good read at the same time.

Happy Reading!
Posted by Nicole, The Book Lover at 11:00 PM